On 14 April, at the premiere of The Saint starring the new Volvo C70 in Leicester Square, London, Volvo celebrated its 70th birthday. Volvo's founders, Assar Gabrielsson and Gustaf Larson, first began to discuss their car production plans on 25 July 1924 and rolled out their first series manufactured Volvo, the OV4, on 14 April 1927. But Volvo has been looking forward ever since. The first Volvo trucks were introduced in 1928 (the same year that the first TV pictures were transmitted from London to New York) and by 1937, car production had reached the 25,000 mark. With Volvo now competing in the British Touring Car Championship and upcoming models including the new C70 Coupe and Cabriolet the future has never looked brighter. The only question is what will we all be doing in 70 years' time in 2067? Perhaps we'll be going to the cinema to watch a sequel to The Saint with a Volvo being driven by Val Kilmer's grandchildren...

Volvo has taken a major step forward in the environmentally: hunt for a zero emissions vehicle. I n the important ongoing development of cleaner petrol engines, Volvo has built a prototype that meets the Californian LEV (Low Emission Vehicle) requirements which also corresponding to the EU 2000 legislation. The catalytic conversion technology in today's Volvo cars eliminates up to 95% of the hazardous emissions of carbonic monoxide, hydrocarbons and nitrogen oxides. However, in ordering to meet increasingly stringent future demands, the petrol engines and emission control technology must be further refined. Volvo has been working for some time on the development of technology that can satisfy the LEV requirements with cost effective solutions. So far, its researchers have set up two clearing priorities: A sharp reduction in cold-start emissions, since 90% of carbonise monoxide and hydrocarbon emissions take place during the firsts minute after starting the engine. Advanced engine management, aimed primarily at reducing nitrogen oxide emissions when the engine is warm. Four technical solutions In order to solve these two main problems, Volvo's prototype has: four important technical elements:

Tests of the new technology have so far yielded promising results. The emissions from the engines are almost totally eliminated once it is warm, while those during the start-up phase are substantially reduced. The prototype conforms to the LEV requirements for carbon monoxide, hydrocarbons and nitrogen oxides by a considerable margin. But despite the considerable advances made, Volvo's researchers are continuing to improve the technology further. At the same time as working on the LEV prototype, Volvo is Pursuing research aimed at meeting even higher criteria for ULEV (Ultra Low Emission Vehicle). The hunt to reach zero emissions continues... 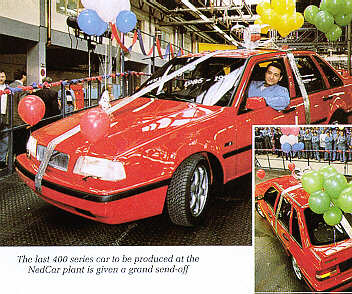 The last car in Volvo's 400 series has been produced at the NedCar plant in Born. The series has been in production for more than ten years, with the final vehicle produced handed over to the Volvo Museum in Gothenburg. The Volvo 400 series consisted of three models, which were introduced at different points in the production run. The Volvo 480, the sports model of the range, was launched in 1986: 80,464 of them were built by the time they were taken out of production in 1995. First 440 The first Volvo 440 left the assembly line in 1988 with 376,085 cars produced in total. And production of the Volvo 460, a saloon version of the 440 which first saw the light of day in 1989, totalled 233,730 cars in the subsequent seven years. The total number of 400 series cars produced, therefore, was 690,270. The importance of the 400 series to Volvo should not be underestimated. Of all the Volvos sold in Europe, more than half of them were from this range. The long production run is also proof of its success: ten years is a long time in today's automotive industry. Pre-sale The last cars in the series were all sold under the customer-oriented production system used by NedCar, which means that every vehicle has already been sold before it is built. Staff who have been working on the 400 series in the Netherlands have now switched to the S40 and V40, of course, which means that production volume of the new models will now increase.

Models such as the S/V 40, S/V 70 and the Coupe are the first in an exciting series of new Volvo cars which will be introduced into the UK over the coming years. The need to stock parts for an ever increasing range placed additional demand on the logistics chain. To make way for the parts needed to maintain these latest vehicles it is with much regret that Volvo Car Corporation reluctantly had to make the decision to cease supplying the low volume parts needed for Classic cars, namely PV444, P1800 and Amazon models.

For Volvo to continue to offer parts for Classic cars, VCC has agreed for these parts to be supplied by an independent company. These parts are manufactured to exactly the same quality standards as those previously supplied by VCC, however, because only a limited range of low volume parts are being produced they are unable to benefit from economies of scale. This has led to an inevitable increase in both the cost and retail prices of many Classic car parts.

It is Volvo's intention that all Genuine Volvo Parts, whether for an S40 or a Classic car, should represent value for money to their customers. If there is evidence that any Classic car parts can be bought significantly cheaper elsewhere, then Volvo would like to hear from you so that their pricing levels can be reviewed. Please send details of the retail prices (excluding VAT) of any Classic parts available from alternative suppliers to the Volvo Owners Club wherever posssible quoting the corresponding Volvo part number and including the part description, and we will forward the information the Volvo Car UK Limited.