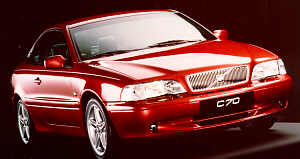 VOLVO'S DISPLAY AT the British International Motor Show was a powerful illustration of the changes sweeping across the company, as the latest new model makes its UK debut - a stunning coupe badged C70. Co-starring alongside the elegant C70 were examples of the company's most recent introductions - the new stylish S40 saloon and the innovative five door V40 - and an all wheel drive version of the highly acclaimed 850 range and two examples from the luxurious 900 series. A true four seater, high performance sports car and billed as this year's show stopper, the C70 is the first car to emerge from AutoNova, a joint venture between Volvo and UK based engineering specialist, TWR. Styling is by Volvo's own team led by Brit, Peter Horbury, whilst TWR worked on the chassis development to ensure that the sporty C70 handles as well as its looks promise. The C70 borrows much of the technology from its stablemate, the 850R. Under its sleek bonnet is the powerful: 240 bhp turbo-charged 2.3 five-cylinder driving the front wheels. Top speed (150 mph) and 0-60 mph (7.0 sees) exceeds that of the already rapid 850R, thanks to the lower weight and aerodynamic shape. Available in a range of vibrant colours including Saffron and Cassis, prices are expected to start from around £30,000 when it goes on sale in the UK next summer.

Double Whammy - Volvo's 850 does it again

VOLVO'S 850 RANGE has added yet another accolade to its growing roll of honour, by topping the estate car category in the Auto Express New Car Honours for 1996 - for the second year running. This latest trophy is added to a world-wide list of awards that exceeds 60 since the 850's launch five years ago. Ranging from styling to safety and from Germany to Japan, Volvo's 850 has won a record number of awards, making the car one of the most successful of the 1990s. "Every award is very special, but competition in the estate car market has never been tougher and this Auto Express honour has confirmed that we still lead the class," says Charles Hunter-Pease, Managing Director of Volvo Car UK Limited. The success story continues, 850 sales have increased year on year (a staggering 17 per cent on 1995 figures). The introduction of new variants including the 2.5 Turbo Diesel and 2.5 LPT All Wheel Drive ensure that Volvo will continue to claim more than 45% of the large estate car market.

VOLVO WILL RACE its stylish new S40 model from 1997 onwards, replacing the highly successful 850 in the international Class II Super Touring Category. Volvo with racing partner TWR, has also confirmed its commitment to the Auto Trader RAC British Touring Car Championship for the 1997 season. Volvo has competed in the BTCC since its return to international motorsport in 1994. The Volvo 850 Estate captured the headlines in 1994, whilst in 1995 with the new 850 Saloon, Swedish ace, Rickard Rydell took a record 13 pole positions and 4 race wins on his way to third place overall. This year the TWR built Volvo 850 has consistently been the leading front wheel drive car taking the fight to Audi and BMW. Drivers Rickard Rydell and Kelvin Burt have taken the 850 Saloon to third overall in the 1996 Manufacturers' title. President of Volvo Car Corporation, Tuve Johannesson, "Volvo's image both in the UK and across the globe has been transformed by the 850 and its involvement at the sharp end of top class motorsport. Today's announcement marks the start of another new era. S40 is an exciting road car and we hope and expect the race car to carry Volvo to new heights of achievement next year in what is still the world's most competitive Touring Car Championship." The all black prototype S40 began its intensive development programme at Snetterton on 16 September. John Gentry, TWR's Chief Designer, "The S40 prototype car is right on schedule, without affecting our 1996 challenge with 850. The car has some advantages over the highly competitive 850 which we aim to maximise through the winter."