The future will soon be here with Volvo On Call, a new advanced telematics system using digital technology which brings exciting new functions that once only existed in the fantasy world of science fiction films. 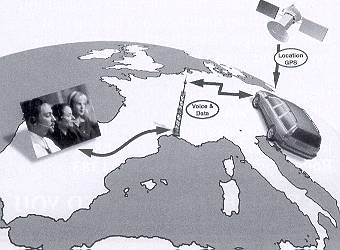 Volvo On Call, due to be introduced in late 2001, uses the computer networks in Volvo's advanced Multiplex electrical system and an integrated telephone to communicate between the driver, a Volvo call centre and even the car itself.

For example, Volvo On Call:

In order to be well protected, the phone unit is located in the middle of the car's dashboard. It is also collision-tested and copes with extremely high stresses. In addition, the phone has its own back-up system: if the collision is so powerful that the phone is dislodged, it has its own aerial and back-up battery so it can automatically send an alarm message.

But this is just the beginning... At the first stage, Volvo On Call, as might be expected from Volvo, is primarily a safety and security system but it will be gradually developed to become much more than that.

"We cannot say at present exactly what will be offered in the future. It's imagination and technical development that set the limits. Development will obviously also be governed to a large extent by customers' wishes. But the examples we have mentioned here are all realistic and feasible in view of the plans that exist and development projects expected to emerge over the next few years," says Henric Perman of Volvo Car Corporation. "However, we at Volvo feel that we are some way ahead of the field with our computer-based electrical system. We are already opening communication between the phone and the car's network as we launch Volvo On Call. The first important step has been taken and the link is established," continues Perman, who concludes: "New cars with the Volvo On Call system installed will probably be able to add new services as and when they become available, because the present models - the Volvo S80, V70, Cross Country and the new S60 - already have the advanced Multiplex system."