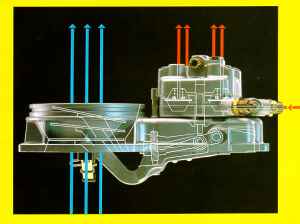 The Engine's Fuel Requirements
A spark-ignition engine needs a particular air-fuel ratio in order to operate. The ideal air-fuel ratio is 14.7:1. Certain operating conditions make it necessary to correct the mixture accordingly.

The air-fuel ratio
Essentially, the power, the fuel consumption and the exhaust-gas composition of a spark-ignition engine depend upon the air-fuel ratio. Perfect ignition and perfect combustion only take place within particular air-fuel ratios. In the case of gasoline (petrol), the ideal air-fuel ratio is about 15:1. In other words, 15 kg of air are required for complete combustion of 1 kg of gasoline (stoichiometric ratio). Deviations from this ratio affect engine operation. The amount of fuel to be injected depends upon load, engine speed and the particular exhaust-gas regulations in force at the time. Depending upon the mode of operation, i.e. idle, part load or full load, a different air-fuel ratio is optimal in each case. Of decisive importance is the strict adherence to the particular most favourable air-fuel ratio at any one time.

This means that the amount of air supplied to the engine corresponds to the theoretical amount of air required (stoichiometric air-fuel ratio).

This means air deficiency, or a rich mixture, and increased power.

This means that the mixture will no longer ignite, the lean misfire limit (LML) has been exceeded.

In spark-ignition systems, fuel management is by means of either a carburettor or a fuel-injection system. Although, up to now, the carburettor has been the most commonly used method, there has been a distinct trend in the last couple of years towards manifold fuel injection. This trend came about due to the advantages offered by fuel injection as regards the demands for fuel economy, high performance and, last but not least, a lower level of pollutants in the exhaust gas. These advantages are based on the fact that manifold fuel injection permits extremely precise metering of the fuel depending upon the operating conditions of the engine and its load, and taking environmental effects into account. With manifold fuel injection, the correct air-fuel ratio is maintained so precisely that the pollutant level in the exhaust gas is considerably lower. Since with this system, the carburettor is no longer required, the intake paths can be optimally designed and laid out. This results in better cylinder charge which in turn leads to a more favourable torque characteristic.

What types of mixture formation are available using fuel injection?

There are both mechanically and electronically controlled systems available. The K-Jetronic is a mechanical fuel injection system which injects continuously and which needs no form of drive whatsoever.

The fuel is supplied by an electrically driven fuel pump which develops the pressure necessary for injection. The fuel is injected by solenoid-operated fuel-injection valves into the cylinder intake ports. The injection valves are controlled by an electronic control unit (ECU) and the amount of fuel injected depends upon the length of time that they stay open. By means of sensors, the ECU is provided with information about the operating conditions of the engine and about the ambient conditions around the vehicle. The basis for assessing the amount of fuel to be injected is the amount of air drawn in by the engine. The L-Jetronic is an electronically controlled fuel-injection system. In the case of the L-Jetronic, the amount of air drawn in by the engine is directly measured by an air-flow sensor. Electronically controlled fuel-injection systems are dealt with in detail in the Publication "Electronically Controlled Fuel Injection" in the Bosch Technical Instruction series.

The K-Jetronic is a mechanical fuel injection system from Bosch. It is divided into three main functional areas:

The amount of air sucked in by the engine is controlled by a throttle valve and measured by an air-flow sensor.

The amount of air, corresponding to the position of the throttle plate, sucked in by the engine serves as the criteria for the metering of the fuel to the individual cylinders. The amount of air sucked in by the engine is measured by the air-flow sensor which, in turn, controls the fuel distributor. The air-f low sensor and the fuel distributor are assemblies which form Part of the mixture control unit. Injection takes place continuously, that is, without regard to the position of the intake valve. During the intake-valve closed phase, the fuel is "stored" in the intake tubes.

Outline of system
The fuel is drawn out of the fuel thank by an electrically driven fuel pump. It is then forced, under pressure, through a pressure accumulator and a fine filter to the fuel distributor, which is located in the mixture control unit. The pressure is held constant by a pressure regulator in the mixture control unit from where it flows to the fuel-injection valves. The injection valves inject fuel continuously into the intake ports of the engine cylinders. The designation K-Jetronic stems from his fact ("K" stands for the German word for "continuous"). When the intake valves open, the air-fuel mixture is drawn into the cylinders. The individual subassemblies of the fuel-supply system are described in the following

Electric fuel pump
The electric fuel pump is a roller-cell pump the electric motor of which is permanently surrounded by fuel. The fuel pump is driven by a permanent magnet electric motor. The rotor disc which is eccentrically mounted in the pump housing is fitted with metal rollers in notches around its circumference which are pressed against the thrust ring of the pump housing by centrifugal force and act as seals. The fuel is carried in the cavities, which form between the rollers. The fuel flows directly around the electric motor. There is no danger of explosion, however, because there is never an ignitable mixture in the pump housing. The pump delivers more fuel than the maximum requirement of the engine so that the pressure in the fuel system can be maintained under all operating conditions. During starting, the pump runs as long as the ignition key is operated. The pump continues to run when the engine has started. A safety circuit is incorporated to stop the pump running and fuel being delivered if the ignition is switched on but the engine has stopped turning (for instance in the case of an accident).

Fuel filter
Due to the extremely close tolerances of various components in the system, it is necessary to fit a special fine filter for the fuel in order to guarantee faultless performance of the K-Jetronic. The fuel filter retains particles of dirt which are present in the fuel and which would otherwise adversely affect the functioning of the injection system. The fuel filter contains a paper filter element, which is backed up by a strainer. This combination results in a high degree of cleaning being achieved. A supporting plate is used to hold the filtering elements in place in the filter housing. It is of utmost importance that the direction of flow indicated on the housing is complied with. The filter is fitted in the fuel line downstream of the fuel accumulator.

Remember to take all necessary safety precautions when working on your car.