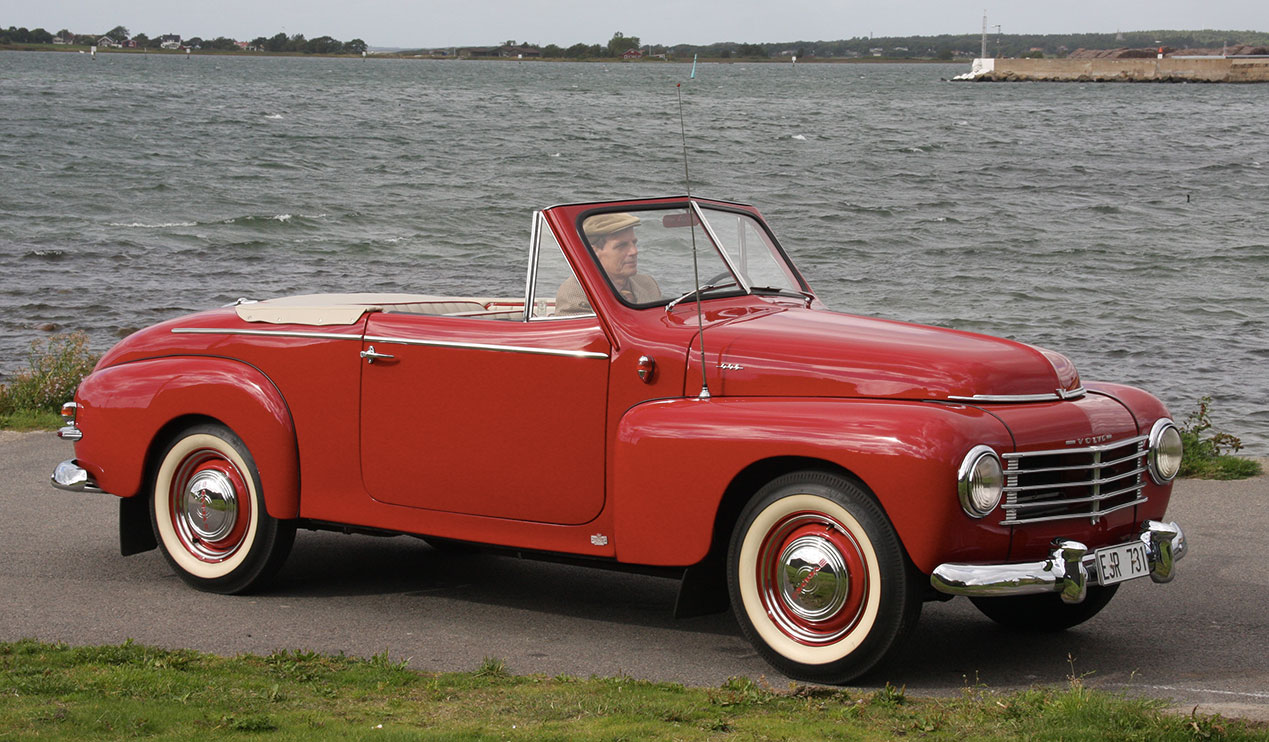 It may surprise you to know, as it surprised me, that no less than 530,467 Volvo PV variants were produced between 1944 and 1969. The vast majority were the two door saloons, 440,000 in fact. There was also an estate car and a van. They were all in left hand drive form as the importers for this country never sold them in England. In 1924 the decision by Gustaf Larson and Assar Gabrielsson, two friends who had previously worked for the Swedish SKF bearing company, was made to produce cars in volume production. They were initially backed by SKF. The Volvo name had been registered as an SKF trade name, but was not used by the new company until 1926. The name Volvo is from the Latin meaning "I rotate". The PV was designed as a tough, go anywhere vehicle, well up to the demands of hard Scandinavian winters and loose surfaced roads. Volvo always seem to have been influenced by North American styling and that can be seen very clearly when you look at a PV. It resembles certain American pre war cars made by Ford and Chevrolet. The front suspension owes something to the US also. The high saloon body with its fast back styling certainly gives plenty of headroom but is a little on the narrow side. It has some limitations due to the very small, high rear window and rear vision at the best restricted. I have lost count of the many times I have reversed into things with my PV and that is the latest PV544 with the "large" rear window. The car, to my mind, absolutely oozes character and surprises people with it's turn of speed. It looks absolutely perfect in a Swedish setting, with red coloured houses among the lakes and trees of a Scandinavia.

The PV came in various versions, starting with a 3 speed 1414cc engine and split front and rear screens in 1944. This gave a top speed of 76 mph on 44bEp and cost the equivalent of £480, which was expensive. It was always expensive in England and probably explained why it was never imported. The 1583cc version still with 3 speeds but 70bhp with one Zenith carburettor arrived in 1956 and was followed in 1957 with twin SU version in 1957 that gave 85bhp and was good for 90mph. When the MOTOR magazine tested this version in 1957 they found it would do 95mph and despite only 3 speeds had prodigious acceleration. They found that they could take an excellent photograph of the engine by standing on the roof of the car. Volvo's were always strong! The PV was faster than an Alfa Giulietta then despite the Alfa's twin cam engine. The PV progressed to 1800cc and four speeds with larger front and rear screen from 1961 until production ceased on the saloon, and was in this form a genuine 100mph car. The PV Duett continued in production until 1969. If you have not already fallen for the charms of the Volvo PV - things to look out for when purchasing one are not that many really. The youngest PV will now be thirty years old, so even a car as solidly built as a PV will have some rust. In my experience the things to look for are, the front chassis outriggers particularly on the part that supports the radiator and anti roll bar, door bottoms, rear inner wings and the area of boot floor at the very back of the car. The floor can also be rusty. My car needed lots of welding and reinforcing on the front outriggers. It has also had four new wings. these were not too expensive, I seem to recall £160 each for the front and £120 each for the rear, although these prices may be out of date now. The mechanical parts are well nigh bulletproof. The later B18 engine and gearbox came in the Amazon but the rear axle is different being a M27, fitted to the PV and, I think, the very early Amazon models. Axle ratios are 4.1 for later cars and 4.56 for the earlier ones. All mechanical parts seem to be available, although some axle parts are difficult but trim and chrome parts are very tricky to obtain.

Gunnar Andersson was a young man in the motor trade in Sweden, who enjoyed rallying and racing and wanted to use a Swedish car. When Volvo manufactured the twin carte B16 PV in 1957 he realised that here was the car for the job. He rallied his own car that year and was third in the very tough Greek Acropolis rally. AB Volvo realised the potential of the car and from 1958 Gunnar Andersson was employed by Volvo to drive their cars for them. He was European Rally Champion the year after in 1958. Before that, however, the PV had excelled in rallies like the Liege-Rome-Liege or Marathon de la Route as it was called. The Liege was a thinly disguised road race around Europe, even as far as Bulgaria in later years. A rally that lasted up to four days non stop. The Liege was run by a Belgian, Maurice Garot. His formula to get a result was simple, the car had to comply with the law and have four wheels - it made scrutineering that much simpler! Protests were not expected or encouraged. The average speed was set at what seemed a modest 31mph, but you had to average that speed or you would find the controls would have closed before you arrived at them, and you were out of the rally. There was, of course, no time for any repairs or servicing. Cars were even started three at a time from each control. M Garot's idea was to have two finishers - one to be first and one to be last. It could never happen now but in the marvelous traffic free days, what an adventure! In 1957 Volvo was the only team with a 100 per cent finishing record - four cars started and finished. In the days before disc brakes, the only real weakness of the PV was its brakes. I well recall a motor club talk by Peter Harper, who was at the time driving the works Sunbeam Rapiers, wherein he said the Sunbeams used to send one of their team of cars out at a furious pace to try to draw the Volvo PV along to try to ruin their brakes, this being their best hope of beating them.

The PV went from strength to strength, winning our own RAC rally, in probably the fastest Volvo driver Tom Trana's hands in 1963 and 1964. It was a bit outdated as a rally car by then but in the correct hands was still a winner on rough, tough, loose surface events. The best PV story of all I think is of Joginder and his brother Jashwant Singh's 1965 East Coronation Safari win. Volvo had taken four cars to Kenya in 1964 for tracks. It was accepted as the hardest event in the calendar. The cars arrived too late that year and could not be tested under African conditions and for a variety of reasons they all failed to finish. Volvo did not take all the cars back to Sweden with them but left one for Joginder Singh to rally in Africa for the rest of the year. During this time he modified the PV and strengthened it where necessary and lowered the axle ratio. The car had covered 42,000 miles mostly under rally conditions. Joginder's intention was to enter the 1965 Safari Rally. The story has a fairy tale ending, they won by 100 minutes. You can perhaps imagine the headlines in the papers - "Safari won in a second hand car." Joginder won again, but not in a Volvo, in 1974 and 1976 just to show that the driver had a fair bit to do with the result. Any of you lucky enough to attend a PV Register meeting a few years ago at the Shuttleworth Trust in Bedfordshire would have been able to see Joginder and his beloved PV (KHT 184) now immaculate in its original white paint.

I just wonder if any of the old works cars are still in existence and just what modifications the factory used in those no holds barred Group 6 events like the Alwpine and Liege. The 1961 Homologation papers show four wheel disc brakes as well as the Joginder Singh inspired four damper front suspension set up. Did they ever use two twin choke Weber or Solex carburettors as offered by the Volvo R Sport in any events? It would not surprise me and I would love to know. I list below the production records and model changes - these taken and other material from Andrew Whyte s book the "Volvo 1800 and Family."