This event took place on the 25th Anniversary of the original 1968 Lombard London to Sydney Marathon. This year's marathon attracted around 109 entries of which nine were Volvos; cars had to be pre-1969 models. The event started from Chelsea Harbour on the 17th April, and finished at the Sydney Opera House on 16th May.

To give some idea of the scale of the Marathon, there were competitors from 22 countries, driving 21 different makes of car. The organisers booked 88 hotels in 15 countries in six languages and eight currencies. In India, competitors were the guests of the Maharajas of Jodhpur and Udaipur, in two of India's most spectacular palaces.

The event's working budget was £1.85 million; it had a fleet of aircraft which included two Antonov transports, the world's largest, modified to carry 55 cars each; a 300 seat Illyushin 86; a 16 seat LET turbo-prop and a Cessna Grand Caravan.

The route covered around 11,000 miles, and included 46 special stages ranging from 10 kms to 168 kms in length. Baron Ernst Harrach created a 14 km stage on his Schloss Harrach estate in Austria, and there were more than 1,000 km of stages in Australia.

For private entrants, the cost of competing in the event is quite awesome, something like £45,000; the entry fee alone was £12,900.

An entry of particular interest was a 144 crewed by two former members of the world-famous RAF Red Arrows acrobatic team, Derek Bell and Terry Kingsley. The car was beautifully prepared, and was sponsored by the Club in a small way.

The complete re-build and preparation of the shell was carried out by Pretty's Garage bodyshop on Eye airfield. At the handover ceremony on March 3rd long and close scrutiny revealed that the work had been done to an extremely high standard. Derek Bell revealed that during the total strip-down of the car, only two bolts could not be removed with normal spanners, which says a lot for Volvo's original component and build quality.

Preparation of the B20B engine was done by Holbay Ltd, the quality again being demonstrated by the subsequent reliability. The engine was fully re-built, and modifications included:—lightened flywheel, gasflowed head, 'K' cam, steel timing gears, Mahle pistons and a competition clutch. The twin SU carbs were completely re-built.

The transmission was four speed manual, overdrive being left off in the interests of reliability. A limited slip differential was fitted to aid traction on the special stages. No back-up service vehicles were allowed, so a good deal of spares had to be carried in the car.

Mechanically, the meticulous rebuild paid off, and Derek and Terry had a fairly trouble free run. The only real problem was when the very fine Australian dust got into the alternator and wrecked a bearing. The ignition timing had to be retarded on parts of the route, as at times the only petrol available was 87 octane. 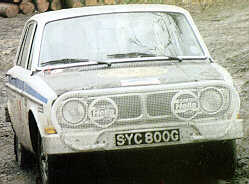 When the competitors reached Australia, easily the toughest part of the rally, our counterparts, the Volvo Owners Club of Australia, pulled out all the stops to help the nine Volvo-driving competitors. Nine Members met the nine cars at the airport, and conducted them to a Volvo Dealer to be serviced and made ready for the rough, tough journey across Australia. The Dealer could not have been more helpful, and gave the crews full access to all necessary workshop facilities and tools.

Seven of the nine Volvos which started the rally successfully completed the event, Derek and Terry finishing in 80th place.

The Team Manager, whose duties included the unenviable task of raising the necessary finance, was ex-Hercules Navigator, Chris Betson. A good deal of credit must also go to Pretty Garages Managing Director, Andrew Gorrod, for his tremendous interest and enthusiasm for the project. Andrew actually flew to Australia, and spent a good deal of time supplying help and technical advice. Well done, and congratulations to all concerned.