For some time I had thought about owning an 'older' Volvo, something from the 60's like an Amazon. I had looked after my 1981 244GLE and it had given me 232,000 miles of trouble-free motoring. Now I had traded it in for an 850 T5. Unadulterated luxury. Then in January 2000 by pure luck, a 1953 PV444 came my way. It was black with grey/blue striped cloth seats and black rubber mats and trim panels. I was amazed to find that it had an ammeter and oil pressure gauge as standard, built into the dash. It also had a 6-volt cigarette lighter. The single speed heater was mounted under the bonnet. The owner had died a year earlier and it had sat in a garage, undiscovered by the family. They wanted to get rid of it but wanted to keep the registration number, VBH1. That was the late owners initials. Until 1989 he had kept it in his home in France and had looked after it very well, but clearly used it a lot. I went to see it in a garage yard on a wet January day. It looked sad and dismal, with flat tyres and was very dirty and the paint tarnished. The inside was untidy and dirty also. There were no signs of rust, but there were some marks on the body, but nothing too bad. I put a new 6-volt battery in it and some petrol. It started without too much trouble and sounded good considering it had sat for a year.

For the family to get the registration number the car needed an MOT, and so they offered the car to me on condition I did the repair work and got the MOT. The garage checked it over and showed me a long list of problems, including the king pins and brakes. I drove it home slowly and put it into the garage. I had forgotten much of the technology used in these older cars and so the first thing was to find a workshop manual, and that came easier than I expected. A thorough look over the car was the next thing to do. All the electrics worked, but the brakes were dreadfull, they pulled sharply to the right. One front and one rear wheel were binding, and the steering was all over the place. There was a loud knock from the underneath when driving it. The underside was filthy, covered with lots of dirt and muck. Where was I to start?

A good wash was first on the agenda. All the badges and trims were removed for cleaning. There was a chrome trim on the top of the bonnet that was clearly not original, so that would need to be sorted out later. A whole day with some very mild T-cut removed all the grime from the body. The following day was spent applying a good quality old fashioned polish. The end result was wonderful. The mats were all removed and floor pan examined. Some minor surface rust was present but that presented no problem. I noticed that the underside of the mats was a light blue. They had been painted black. The trim panels had also been painted black. It was now time to clean the underside. It took 2 days using the pressure washer to blast all the muck from underneath the car. It took several more days lying under it using a paint scraper and wire brush to remove the remaining muck and the bitumastic underseal that was under the wings. I have never been so dirty, and I don't ever wish to do a job like that again. Minor surface rust was treated and then the underside was sprayed with Waxoil, another filthy job. The inside of the doors were also Waxoiled

Now to look under the bonnet. The radiator had lumps of what looked like plastic filler, so that was removed and sent to be fitted with a new core. Meanwhile the Zenith carb was sent for refurbishing. The plugs were well past their best and I was able to find the original spec Champion Y6 plugs. When rad and carb were both back and fitted, and fresh coolant added, the engine was fired up. It started much better. The idle mixture was set using Gunson's Colortune. Apart from the occasional 'pop' in the exhaust, it ran well. After the oil got hot, it was drained out. The remote oil filter canister was removed and cleaned. There was a lot of thick sediment at the bottom of it. Fresh Castrol Classic oil and a filter were fitted and it now sounded good. The gear box oil was drained and replaced with fresh oil. The diff drain plug would not budge, so that was left for now. The ignition timing marks were on the flywheel, I'd never seen this before, so static timing setting was new to me. New points were fitted and I set about setting the timing. According to the book the timing should be 5 deg BTDC, but I advanced it a few degrees as modern fuel does not burn the same as the 50's. It ran much better, but still had the occasional 'pop' in the exhaust. The tappets were checked and found to be OK.

A good examination of the suspension showed that it was in a poor condition. The shocks were the original Daytona make, and the body of two of them had rust holes. All four were replaced with Monroe shocks, and the coil springs were replaced also. All the rubber bushes were replaced. Have found all the grease nipples, fresh grease was pumped in. The old grease that was forced out was black and dried out. The slack in the king pins was clearly caused by lack of grease, because there was no play in them after the new grease was pumped in. The steering box was dry so that was filled with gear oil and the adjuster nut reset to take up some of the slack. I decided to take it 'round the block' to see how it felt. I was thrilled. It was a lot more stable and the steering lighter and more positive. Back to the garage to start on the brakes. 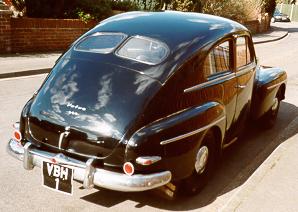 All the brake cylinders were in very poor conditon and had to be replaced. All the flexible hoses were also replaced. New linings were fitted to the shoes, but the auto adjusters were broken and I could not find replacements, so they would have to be left off. New grease was applied to the front hub assemblies and everything refitted. The master cylinder was buried deep in the engine bay and not very accessible and looked a nightmare to top up when bleeding the system. Later models had a remote brake fluid resevoire and fortunately this can be retro fitted. I used a pressure system to bleed the system and get all the old fluid and air out. Apart from a longer brake pedal travel because the adjusters were not fitted, the brakes worked well, for a PV!

A new exhaust system had been ordered as the system on the car was not the correct one. Fitting the new system and lying on my back was not as easy as first thought, it took about 2 hours, but there was a noticeable improvement when I started the engine. Over the coming weeks the headlamps were replaced along with the chrome trims: new drivers door lock mechanism and lock cylinders in the drivers door and boot, as the original keys were missing: the wheels were cleaned up and white wall tyres fitted. As I was replacing the engine mountings one of the oil hoses to the remote oil filter canister broke, so both the hoses were replaced. The rear mud flaps were Citroen, and held on with home made plates. The proper mountings were obtained and proper Volvo mud flaps fitted. The front bumper, which was in 3 sections, was badly dented in a few places, so new sections were fitted. The rear would be rechromed at a later time, along with the door and boot handles.

New grey rubber liner mats and sound deadening felt were fitted and all the cardboard trims were replaced with the correct grey coloured trims. The rear hat shelf was a problem as this was no longer available, only the 544 hat shelf. This had to be cut to fit, but it was not perfect, but acceptable. Then the AC fuel pump packed in, and a replacement was sought.

The car is fun to drive, and attracts lots of attention wherever I go. Despite the 44hp engine and 3 gears, it pickes up well and runs quite smoothly at 50mph. Leaded fuel is still available and until I take the head off that is what I will run it on. Fuel consumption is not great, about 25mpg. The oil gets dirty very quickly as the oil filter is a by-pass system not a full-flow. I changed the oil after 600 miles and it looked as if it had done 10,000 miles. It is important to regularly grease all the nipples. especially the king pins. I have also found that the Y6 plugs burn out quickly, I may have to use the later UY6. Most of the main parts are available and there are specialists in Sweden and Holland who remanufacture parts to original specifications. Some body parts are not available and have to be specially made. Parts vary in price, but as with all classic cars, if you want the part you have to pay the price, there is very little competition in the supply chain. There is no road tax because of the age of the car and a Classic Car Insurance with limited annual mileage is not great.

These early cars do not have the comfort for long journies as they were not done that often all those years ago, they were broken into several shorter journies. The rear seat is fairly comfortable considering its basic design - wooden frame with springs, horse hair and padding. I am not a large person, and I find that I am right up against the door. There is not a lot of space between the two front seats: the word 'cosy' comes to mind. The PV444 was a major seller for Volvo from 1944 until 1958 when it was superceded by the PV544, which continued to be as popular. The design is simple but solid. It has smooth flowing lines and certainly turn heads as it passes by.