From T-Ford To T5

A book about the various cars used by the Hampshire Constabulary. 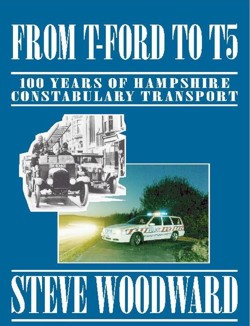 But it was the 850 T5 that gave a new generation of Police officers the thrill of driving a performance saloon with a Volvo badge. The original test car was a beast, no other word for it and it was on that basis that Volvo secured the fleet contract to supply Hampshire with it's new Traffic patrol vehicles in the mid 1990's over the Vauxhall Omega. Since then it has used a succession of 850 T5 estates and V70 T5 models and it's this car that remains the number one choice even now.

Steve Woodward is a VOC member and has been a Volvo enthusiast for many years, borne mainly out of his admiration for the cars whilst using them as a tool for work on Traffic patrol duties in Hampshire. He has owned many Volvo's as his daily transport and currently owns a 1989 240 GLT saloon. His latest project is restoring one of his old patrol cars, a 1985 240 Police Special. Details of that can be found HERE.