Photographs can be seen in our Volvo Gallery

Here are the first pictures of one of this year's most exciting new car models - the new Volvo XC60! "It's not only the safest Volvo ever. If you ask me, it's also the most stunning. Not a bad combination, is it?" says Volvo Cars President and CEO Fredrik Arp. The new XC60 has its premiere showing at the international car show in Geneva on March 4 and the first cars will reach dealers in Europe in autumn 2008.

Volvo Cars' new crossover steps boldly into what is the motoring world's toughest and fastest-growing segment, boasting an exciting mix of two car styles. Down below, the unmistakeable, capable XC muscles are pumped up, creating a strong athletic body mated with high ground clearance and large wheels. Up above, the flowing lines create the sporty charisma of a coupe.

"This car is charged with more emotive form and more energy than any other Volvo. We're elevating our design DNA to an entirely new level by literally turning up the visual volume. If you say that you'd recognise a Volvo from a hundred metres away today, I dare say the XC60 radiates a clear Volvo presence from at least twice that distance," says Volvo Cars Design Director Steve Mattin.

A variety of intelligent safety systems are another important part of the XC60 model's special character. The big news is City Safety - a unique feature that can help the driver avoid or reduce the effects of the type of low-speed impacts that are common in city traffic and traffic tailbacks. If the car is about to drive into the vehicle in front and the driver does not react, the car brakes itself.

"We are the first manufacturer in the world to offer this type of feature as standard. City Safety clearly advertises that the new XC60 is the safest car Volvo has ever produced. The car is packed with our accumulated safety know-how and technology, both when it comes to preventing accidents and protecting all the occupants in a collision," says Fredrik Arp.

The XC60 project has its sights set on a target group that imposes high demands on design, brand integrity and high-tech content in its choice of lifestyle products.

"One might say that this could be the C30 owner's next car. It's as sporty and exciting, but way more capable. With the XC60, we're widening our model range to attract even more customers with an active urban lifestyle," explains Fredrik Arp.

Equal volumes to Europe and North America
The new XC60 is being launched with a choice of three engines: the turbocharged T6 which produces 285 hp, and two variants of the D5 turbodiesel, producing 185 and 163 horsepower respectively. All Wheel Drive (AWD) is fitted as standard.

"During 2009, we will offer a front-wheel driven 2.4-litre version powered by a Euro 5 diesel engine producing 163 horsepower and with a CO2 rating of around 170 g/km," reveals Fredrik Arp.

The sales target for the new XC60 is over 50,000 cars per year. The five largest markets during peak year 2010 will be the USA, Germany, Great Britain, Russia and China.

The Volvo XC60 will be built at the Volvo Cars factory in Ghent, Belgium. Sales of the car will start in Europe during the second half of 2008, while sales in North America will get under way in early 2009. 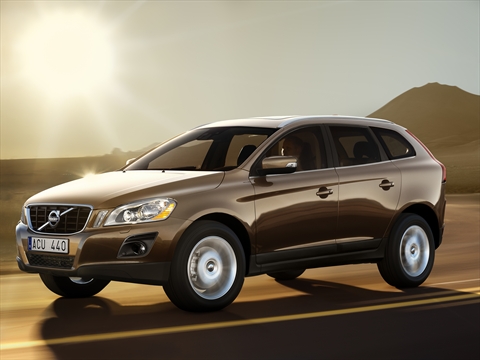